A rotation about an axis a by amount \(\theta\) can be represented on a sphere as any directed arc of length \(\frac{1}{2}\theta\) in the plane perpendicular to the axis, with positive angles giving a counter-clockwise direction around the axis.

Like with matrices, a positive angle of rotation is a counter clockwise rotation. This might sound like a lot of potentially complicated information, but the code implementation is fairly straight forward:

Shortest Arc (from to rotation)

Finding the rotation between two points is best described in [Shoemake 92]. Any two vectors can be considered points on a unit sphere when normalized. The shortest arc between these two vectors lies on a plane that contains both points and the center of the sphere (0, 0, 0). This plane is perpendicular to the rotation axis. The length of the arc is \(\frac{\theta}{2}\) where \(\theta\) is the angle between the two vectors. 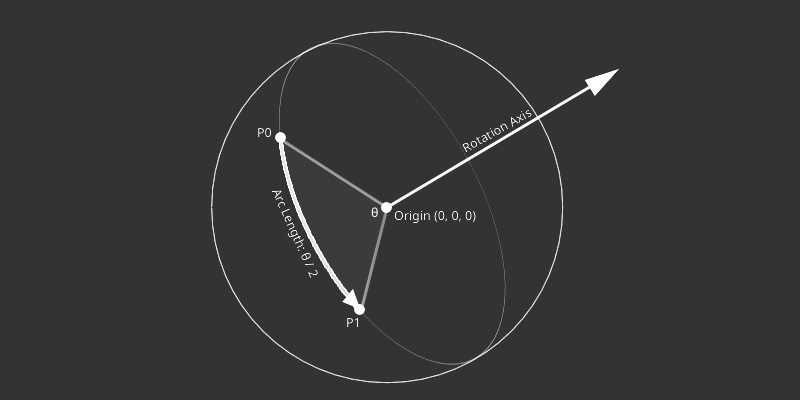 This means we have an axis of rotation and some rotation angle, given this information a quaternion is easy to construct. Find the axis of rotation by taking the cross product of the normalized input points, this results in a unit vector perpendicular to both. Find the angle of rotation between two vectors \(\vec{p0}\) and \(\vec{p1}\) can be found like so: \(\theta = \cos^{-1}(\frac{\vec{p0} \cdot \vec{p1}}{\|p0\| \|p1\|})\).

Finding the angle between two vectors is pretty expensive and should be avoided if possible. Luckily, we can use the properties of the dot and cross products here. Since we know that \(\vec{p0}\) and \(\vec{p1}\) are normalized, the angle between them is the same as the arc-cosine of their dot products: \(\theta = cos^{1}(\hat{p0}\cdot\hat{p1})\). For quaternions, we care about the following relationship between the dot and cross products and sin and cos:

This should look familiar, since we can create a quaternion like so:

Comparing the above equations, we can use the dot and cross products to create a quaternion that rotates two times the distance between the given input vectors. The challenge that left is to somehow half that rotation. There are two ways to go about doing this:

To implement a Look At function using only quaternions, three pieces of information are needed:

Step 1) Find the quaternion that rotates between forward and the target direction. This can be done with the existing from-to rotation method. This quaternion can rotate an object to the correct position, but the objects orientation would be all kinds of messed up. That needs to be corrected.

Step 5) Combine the quaternions from step 1 and step 4. Quaternions can be combined using multiplication, which will be covered later. Quaternion multiplication is reversed (left side multiply), if you want to apply step 1 first, it would be: step 2 * step 1. The code below rotates to the desired direction first, then corrects the rotation to have the correct up vector.

The reason correcting the up direction works, any combination of rotations around a sphere can be achieved by just a singe rotation around that sphere. When quatenrions are combined, they describe all the rotations taken around the sphere, but only produce a single rotation.

Getting the axis of rotation out of a quaternion is trivial, normalize the vector component of the quaternion: